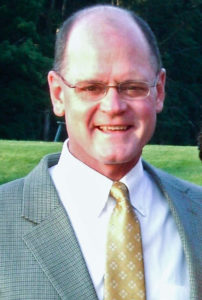 Ted is no stranger to West Virginia Southern Baptists and Southern Baptist Disaster Relief. He became involved in disaster relief during the Clendenin flood relief effort in 2016. That year he was certified as a SBC DR Yellow Hat, and then certified as a Blue Hat in the spring of 2017. Over the past five years, Ted has led multiple WV Disaster Relief projects ranging from mudout, cleanout, rebuild, chainsaw, roof tarping, and feeding.

He is a member of Winfield Baptist Church in Winfield, WV, where he developed their “Helping Hands Project,” remodeling and repairing homes for local low income families; providing academic tutoring, mentorship, and discipleship for children. Ted also has a background in public relations, project management, public speaking, leadership, and volunteer team building.

Since the Lord made it possible for Ted to retire at a younger age than most, he will be able to devote a great deal of time and effort to this non-paid volunteer role.

Please join us in welcoming Ted to this new role. You may email Ted Duty at ted@wvcsb.org.

Sign up to receive updates on news and events.